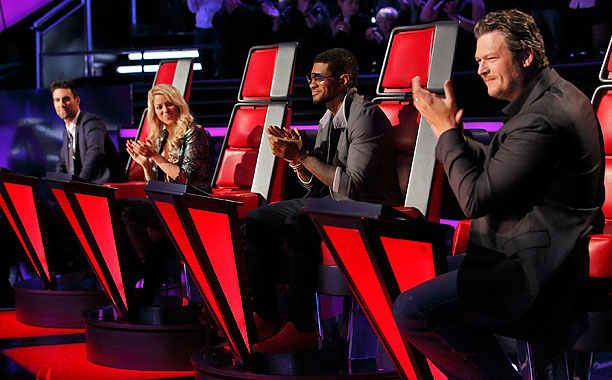 Shakira isn’t going anywhere.NBC has locked down judges for the next two cycles of The Voice.

( Collapse )
Speculation have run rampant as to who will sit in the red swivel chairs this fall and spring, with major media outlets declaring Shakira will exit the series for good after the singer said told reporters she wasn’t planning to return. There have also been rumors that Usher was finished with the show, too.And it was all partly true. Shakira and Usher won’t be back … in the fall.According to sources close to the negotiations, this fall’s edition will reunite the original lineup: Christina Aguilera, Adam Levine, Blake Shelton and, yes, Cee Lo Green. In addition, Carson Daly will return as host for both cycles.For next spring, cycle 6, The Voice will then switch back to its current lineup, which has made for a surprisingly successful shakeup this season. NBC is finalizing deals with Shakira and Usher, who will take the stage along with Levine and Shelton.The addition of Shakira and Usher were so popular with fans that some even urged NBC to add the duo full time. But this strategy will help maintain both variety and continuity next season — the judges are all familiar faces, yet not the same faces all season.Meanwhile Fox’s singing competition panels are still partly in limbo, with American Idol and The X Factor having multiple gaps in their judges panels. US Weekly reported that Nicki Minaj will depart Idol next season, which would whittle down the current panel from four to two (Mariah Carey and Keith Urban, the latter today saying he wants to stay on the show), with two more exits potentially to come. Factor has executive producer Simon Cowell and Demi Lovato set to return as judges, but also has two other seats to fill. Factor has to find its panel soon since production on season three needs to start before the end of the month.